If you’ve ever walked around the University of Manchester campus you might have noticed the ‘Ellen Wilkinson’ building or the plaque pictured below, but who exactly was Ellen Wilkinson and why is she commemorated by the university?

Ellen was a Labour politician, born on the 8th October 1891 into a working-class family in Chorlton-on-Medlock, Manchester. In 1910, she won a scholarship to study history at the University of Manchester and went on to become a founding member of the British Communist Party for which she was nicknamed ‘Red Ellen’. Later she joined the House of Commons as the MP for Middlesborough East in 1924, and Jarrow in 1935 before she sadly died in office as the Minister of Education in 1947.

All this might not sound as remarkable to us now when there are hundreds of female history students at the university and a number of female politicians (although still not an equal number to men). However, in Ellen’s lifetime things were different. In 1910, few women went to university and those who did almost certainly came from more affluent families than Ellen’s, and when she joined the House of Commons in 1924 the number of women who had held parliamentary positions before her could be counted on one hand!

To get to where she did, Ellen Wilkinson fought against the usual expectations for women in early twentieth century Britain, but what I find just as remarkable about Ellen is her record as a politician and commitment to socialism. She never seemed to forget her background, and never ceased to fight for improvements in the lives of working-class British people. For instance, when she stood as the Labour MP for Jarrow in Tyneside between 1935-1947, unemployment was so severe that only 100 men had jobs out of possible workforce of 8000. Ellen supported these men in their plight as they marched the two-hundred miles to London despite the Labour Party reluctance to support their cause.

Similarly, Ellen fought to enfranchise all women. You’ve probably heard that this year is 100 years since women were allowed to vote in Britain, however in 1918 the Representation of the People Act gave all men over the age of 21 and only some women the vote in general elections for the first time. The act only applied to women over the age of 30 who met a property qualification and so only 40% of British women were eligible to vote. Between 1918 and 1928 Ellen campaigned in parliament to extend the vote to all women over the age of 21. This was finally passed in the 1928 Equal Franchise Act.

Sadly, throughout her life Ellen suffered ill health exacerbated by overworking, and in 1947 she died in office aged only 55. The coroner ruled her death was due to an accidental overdose on medication, and it is highly suspected by historians that she took this medication in order to keep herself fit enough to work.

Interesting fact: Ellen was criticised at the time and by historians since for encouraging starving men to march over 200 miles from Jarrow to London, yet along the route they were given sandwiches and money by passers-by, and in fact were said to have been better fed on the march than they had been for weeks! 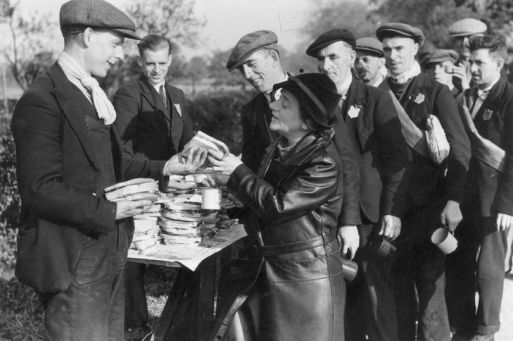 In this image you can see Ellen queuing alongside the marchers to collect their sandwiches most likely on the Jarrow March.

To hear more about Ellen Wilkinson you can listen to this episode devoted to her by BBC Radio 4’s Great Lives: www.bbc.co.uk/programmes/b08zc6fs